Toot toot ….. There is only one Christmas!

How lucky are we… Once again the team at JUSTSO collaborated with the amazing in-store team on the fabulous production and art direction of the world famous Harrods Christmas Store front window display design.

Starting the project with the highest of expectations, we were given the brief, a clear vision, creative direction and the huge challenge of exceeding last year’s spectacular Disney Christmas.  So, with the dedication to pull off such a detailed and bespoke luxury window display design ….. We set to work with the Harrods team!

Back in the late spring and beginning of summer we started the research, the Harrods express needed to be as exciting and genuine as the beautiful British Steam trains of a bygone era that influenced the scheme, in fact a trip on the Orient express was taken to inspire the creative team.   The train and each of the carriages has its’ own personality and a bespoke approach was taken with every element of the detail.

Before the build could begin , precise technical drawings and CAD plans had to be created, the carriages were to be clad in beautiful burs, individual inlays and stud work, all the props ,each carpet, each rug , the curtains,  the upholstery, the furniture, the lights, the beautiful graphics,  in fact the whole look and feel of the project was perfected.

JUSTSO are so proud to have been part of  designing the train engine, skilfully crafted and clad in shiny brass, adorned with the Harrods crest that had been carefully copied from the front of the building and beautifully sculpted by hand, the wheels designed to be moving with the motion of a real train…..  Standing proud next to the station Platform on the most famous corner of the world’s most luxurious department store.

Project managed and realised by JUSTSO and the Harrods Store Image team, to ensure the very unique nature of each carriage, every panel has its’ own detail and finish, in fact pretty much the only thing the runs consistently throughout the entire scheme is the wonderfully magical piece of film that is projected from the carriage windows making us feel like we are on a non-stop luxury trip around the globe.

Once built, the Inside of the carriages transform in to a festive visual feast, beautifully dressed, world class window display design of the highest standards, from the stunning iconic Ralph & Russo dress dripping with Swarovski crystals to the sweetest of tiny baubles, from the most sophisticated and elegant of furnishings coupled with the finest fashion and couture, from the cleverest of games to the cuddliest of toys.  …… there really is something for everyone……… a magical dream of a journey in a beautiful old-fashioned train, a true Christmas spectacle for all to enjoy. 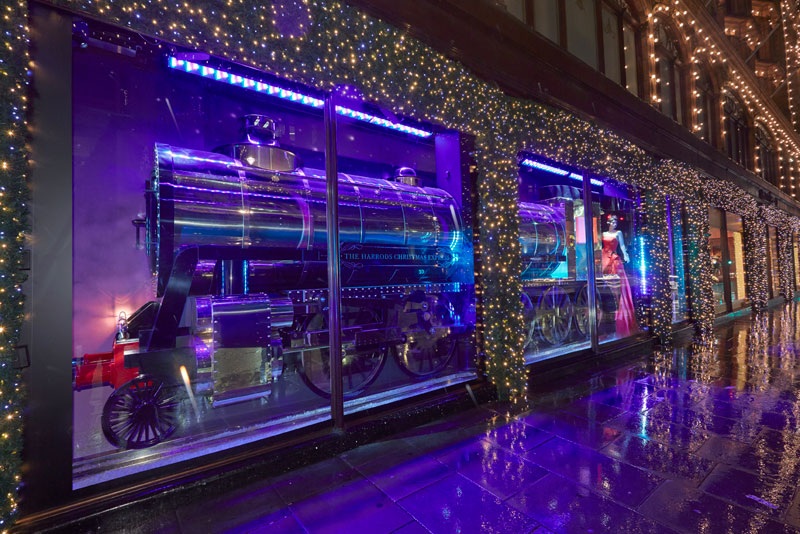