This July, the JUSTSO team were honoured to be given a very special project, the coronation festival! Celebrating 60 years since our wonderful Queen’s coronation, hosted by the Royal Warrant Association, the festival was a celebration of “tradition, innovation and excellence”, showcasing those brands whose services to the royal household had earned the privilege of a royal warrant – and a coat of arms next to their brand – for quality and excellence.

This unique event – which took place between the 11th and 14th of July – was to feature 200 of these exceptional brands and was open to members of the general public who had been lucky enough to get their hands on a golden ticket. Those guests not only got the opportunity to sample some of the royal family’s favourite brands, but all within the elegant surroundings of Buckingham palace – there were also a number of royal appearances throughout the week, with the Queen herself opening the event on the 11th alongside Prince Charles and Camilla the Duchess of Cornwall!

Among the eclectic mix of Jermyn Street tailors, jewellers, chocolatiers and fine wine merchants, House of Fraser – one of Britain’s most popular premium retailers – was one of the brands lucky enough to be granted this royal seal of approval. HOF contacted JUSTSO for creative direction in design and production of their experiential brand pop up shop design, which was to be nestled in the Queens back garden.

The task in hand was to create an experience that expressed not only the brands history and heritage, but also one that was up to speed with digital technologies. After ruling out several concepts, we settled on a final pop up shop design that recreated a familiar atmosphere to HOF stores. Our pop up shop design used bold contrasting colours on the two exposed shop front walls and a slick pink line sweeping across them – visitor’s eyes would also be drawn to the familiar sights of raised mannequins on the shop floor, wearing key HOF pieces.

Keeping a strong digital and interactive focus in mind, JUSTSO embedded flat screen monitors into the two exposed walls, sleekly telling the brands story. The central feature, tied together the fabulous concept of the stand; rather than a physical shopping experience, guests of the Queens party could sit in comfort around an elegant table using specially installed ipads to browse the HOF store. HOF staff would of course be on hand to give the same exceptional service found across all their stores and visitors could sit back, relax and enjoy their spectacular surroundings.

Each day culminated into a fabulous Gala, which brought the palace grounds to life with sounds of the best of British talent – from Welsh singer Katherine Jenkins, English tenor Russell Watson, songstress Katie Melua and pop rock band The Feeling – all in all, the week was a terrific show, one JUSTSO were thrilled to be a part of. 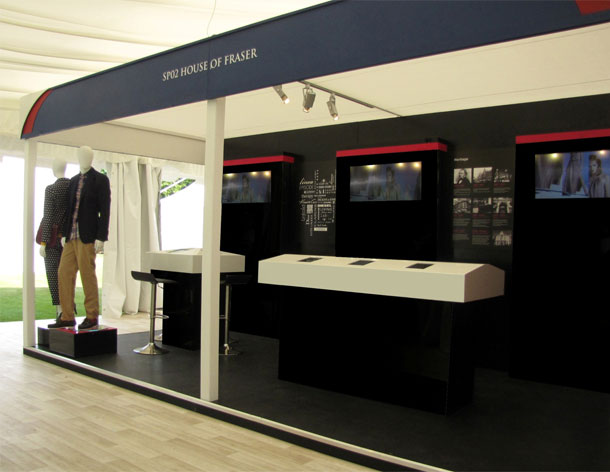